Family, friends and members of the community gathered this evening to remember Hollie Gazzard.

Around 100 people across Gloucestershire united to pay their respects to hairdresser Hollie at a special service in Gloucester one year on from her death.

The 20-year-old was murdered by her ex-boyfriend Asher Maslin at Fringe Benefits & La Bella Beauty Salon where she worked in February 2014.

The service took place by Gloucester Cathedral’s Rev Canon Neil Heaviside outside the salon in Southgate Street and included prayers and songs, including those sung at Hollie’s funeral.

There was not a dry eye amongst the crowds, as friend Ellie Higgs opened the service by signing Bruno Mars, Just The Way You Are, followed by Rihanna, Diamonds.

Hollie’s father Nick said the plan was to gather to remember Hollie. He said: “It is sad that Hollie is not here but tonight is about celebrating her life and the last 20 years. A year ago events changed our lives forever, which we will never get over. We have all had different strategies with how to cope with it.

“Hollie was very fun loving and had lots of dreams. She was only here for 20 years but she travelled and had seven roles in hairdressing in different parts of the country, including the cruise line. She made an enormous amount of friends. Her dream was to open her own salon but the trust is about trying to make that happen.”

Last year the family set up the Hollie Gazzard Trust which aims to educate youngsters about domestic violence, train hairdressers and reduce knife crime in the city.

So far the trust has raised £85,000 and has helped train six hairdressers in partnership with Gloucestershire College. The family are hoping to raise £250,000 this year and train half a dozen more hairdressers.

He said: “There are three people we would all like to thank and that is Nick, Mandy and Chloe for setting an example, the way they have built on Hollie’s life and are trying to improve the lives of others.”

Prayers were then read before a minute silence was done at 6.50pm. The family then invited people to the Teddy Pub in Longlevens, where Hollie also worked. 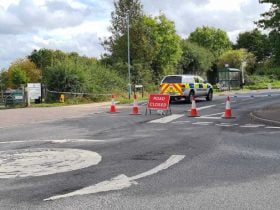 Pedestrian dies in collision with car 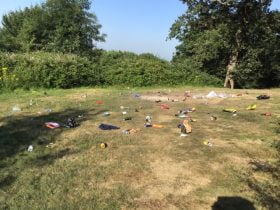